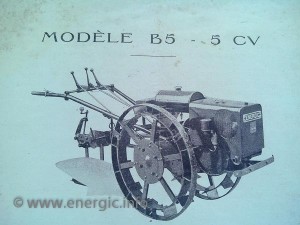 This base model evolved (from the B1) and was developed with customer feedback, to incorporate a number of improvements – notably a reverse gear, repositioning of the exhaust, larger air filter, upgraded carburettor and front protection to the engine, latterly to take internal wheel weights. It was renamed the Energic motoculteur B5. Eventually weighing in nearer 280kg (priced at 6850fr). 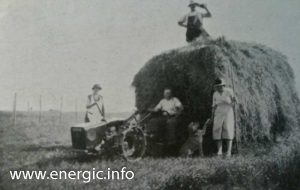 At the same time as the improved Energic motoculteur B5 model introduction a new Energic motoculteur B4 model was introduced. This model incorporated the chassis specification as the B5 model but using a 4 stroke engine, 3 speed and 5cv (priced at 7850fr). This was the forerunner to the C7 B4L and was discontinued when the new engine from Motobecane became available at 7cv. (A Slanzi engine version has just been discovered – see colour photo below).

The Energic motoculteur B and B5 engine, being 2 stroke, was lubricated using Fuel/Oil mixture at a ratio of 8%. Consuming approx. 1 to 1.5 litres of fuel per hour – under normal conditions. Weighing in at just 240Kg’s it was used for light work. With machine widths obtainable between 0.57m, 0.71m and 0.82 of a meter – which was achieved by changing the wheels inside and out on the axles. Turning/direction changes were obtained by blocking one wheel whilst the other rotated freely, by pushing a lever on the handlebars to engage the blockage of the wheel. It had a Chain drive from the modified motorcycle moteur, with implements attached for towing using the “Breveté S.G.D.G” hitch/towing system. All the transmission gears ran in a simple reservoir/bath of oil self-lubricating. The Energic motoculteur B5 offered a ploughing depth on average between 15 to 20 cms. 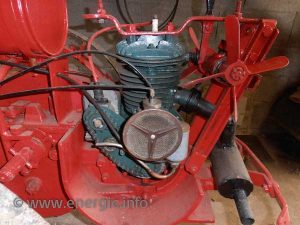 The following implements were available;